The Seattle Seahawks are a professional American football team based in Seattle. The Seahawks compete in the National Football League as a member club of the league’s National Football Conference West, which they rejoined in 2002 as part of a conference realignment. The club entered the National Football League as an expansion team in 1976 in the NFC. From 1977 to 2001, Seattle was assigned to the American Football Conference West. They have played their home games at Lumen Field in Seattle’s SoDo neighborhood since 2002, having previously played home games in the Kingdome and Husky Stadium. The Seahawks are currently coached by Pete Carroll.

Seahawks fans have been referred to collectively as the “12th Man,” “12th Fan,” or “12s.” The team’s fans twice set the Guinness World Record for the loudest crowd noise at a sporting event within the span of a few months, first registering 136.6 decibels during a game against the San Francisco 49ers in September 2013, and later registering 137.6 dB during a Monday Night Football game against the New Orleans Saints that December. As the only National Football League team based in the Pacific Northwest region of North America, the Seahawks attract support from the wider geographical area that includes some parts of the U.S. states of Alaska, Idaho, Montana, Oregon, and Utah, as well as the Canadian provinces of Alberta, British Columbia, and Saskatchewan.

The Seahawks have won 10 division titles and three conference championships, and are the only team to have played in both the AFC and NFC Championship Games. They have progressed to three Super Bowls, losing 21–10 to the Pittsburgh Steelers at Super Bowl XL, defeating the Denver Broncos 43–8 for their first championship at Super Bowl XLVIII, and losing 28–24 to the New England Patriots at Super Bowl XLIX. National Football League players Kenny Easley, Walter Jones, Steve Hutchinson, Cortez Kennedy, and Steve Largent have been voted into the Pro Football Hall of Fame primarily or wholly for their accomplishments as Seahawks. In addition, players Dave Brown, Jacob Green, Dave Krieg, Curt Warner, Jim Zorn, and Matt Hasselbeck have been inducted into the Seahawks Ring of Honor along with head coaches Chuck Knox and Mike Holmgren, radio announcer Pete Gross, and franchise owner Paul Allen.

In March 1975, John Thompson, former executive director of the National Football League Management Council and a former Washington Huskies executive, was hired as the general manager of the new team. The name Seattle Seahawks was selected on June 17, 1975, after a public naming contest which drew more than 20,000 entries and over 1,700 names.

Thompson recruited and hired Jack Patera, a Minnesota Vikings assistant coach, to be the first head coach of the Seahawks; the hiring was announced on January 3, 1976. The expansion draft was held March 30–31, 1976, with Seattle and the Tampa Bay Buccaneers alternating picks for rounds selecting unprotected players from the other 26 teams in the league. The Seahawks were awarded the 2nd overall pick in the 1976 draft, a pick they used on defensive tackle Steve Niehaus. The team took the field for the first time on August 1, 1976, in a pre-season game against the San Francisco 49ers in the then newly opened Kingdome.

The Seahawks are the only National Football League team to switch conferences twice in the post-merger era. The franchise began play in 1976 in the aforementioned NFC West but switched conferences with the Buccaneers after one season and joined the AFC West. This realignment was dictated by the league as part of the 1976 expansion plan, so that both expansion teams could play each other twice and every other National Football League franchise once during their first two seasons. The Seahawks won both matchups against the Buccaneers in their first two seasons, the former of which was the Seahawks’ first regular season victory.

In 1983, the Seahawks hired Chuck Knox as head coach. Finishing with a 9–7 record, the Seahawks made their first post-season appearance, defeating the Denver Broncos in the Wild Card Round, and then the Miami Dolphins, before losing in the AFC Championship to the eventual Super Bowl champion Los Angeles Raiders. The following season, the Seahawks had their best season to that point, finishing 12–4; it would remain the best win–loss record in franchise history until their 2005 season. Knox won the National Football League Coach of the Year Award.

In 1988, Ken Behring and partner Ken Hofmann purchased the team for a reported $80 million. The Seahawks won their first division title in 1988, but would miss the playoffs for the following three seasons, after which Knox left the team.

For most of the 1990s, the Seahawks continued to struggle. They saw three consecutive losing seasons under head coach Tom Flores, including a franchise worst 2–14 season in 1992. Following the 1994 season, Flores was fired from the team and Dennis Erickson was brought in as head coach.

In 1996, Behring and Hoffman transferred the team’s operations to Anaheim, California–a widely criticized move, although the team continued to play in Seattle. The team almost relocated, and was in bankruptcy for a short period. The National Football League threatened Behring with fining him $500,000 a day if he did not move the team’s operations back to Seattle; with this, Behring and Hoffman sold the team to Microsoft co-founder Paul Allen in 1997 for $200 million.

Erickson’s tenure as head coach ended after the 1998; the Seahawks missed the playoffs for all four of his seasons with the team, extending their playoff drought to ten consecutive seasons.

In 1999, Mike Holmgren was hired as head coach. He would coach for 10 seasons. The Seahawks won their second division title, as well as a wild card berth in the playoffs.

In 2002, the Seahawks returned to the NFC West as part of an National Football League realignment plan that gave each conference four balanced divisions of four teams each. This realignment restored the AFC West to its initial post-merger roster of original AFL teams Denver, San Diego, Kansas City, and Oakland. That same year, the team opened its new home stadium, Seahawks Stadium, after spending the last two seasons at Husky Stadium after the Kingdome’s implosion in 2000.

In the 2005 season, the Seahawks had their best season in franchise history with a record of 13–3, which included a 42–0 rout of the Philadelphia Eagles in a Monday Night Football game. The 13–3 record earned them the number one seed in the NFC. Referee Bill Leavy later admitted that he missed calls that altered the game. Before 2005, the Seahawks had not won a playoff game since the 1984 season, a streak of 21 years. That drought was ended with a 20–10 win over the Washington Redskins in the 2005 playoffs.

Holmgren departed from the team after the 2008 season, following the end of his contract. Defensive backs coach Jim L. Mora was named as Holmgren’s successor. In 2009, the Seahawks finished 3rd in the NFC West with a 5–11 record. Shortly after, Mora was fired on January 8, 2010.

In the 2010 National Football League season, the Seahawks made history by making it into the playoffs despite having a 7–9 record. They had the best record in a division full of teams with losing seasons and won the decisive season finale against the Rams. In the playoffs, the Seahawks won in their first game against the defending Super Bowl XLIV champs, the New Orleans Saints, 41–36. The Seahawks made even more history during the game with Marshawn Lynch’s 67-yard run, breaking 9 tackles, to clinch the victory. After the run, the fans reacted so loudly that a small earthquake was recorded by seismic equipment around Seattle and was nicknamed the “Beast Quake.” The Seahawks lost to the Bears in their second game, 35–24.

The 2012 National Football League season started with doubt, as the Seahawks lost their season opener against the Arizona Cardinals, after the highly touted Seattle defense gave up a go-ahead score late in the fourth quarter, and rookie quarterback Russell Wilson failed to throw the game-winning touchdown after multiple attempts in the red-zone. However, Russell Wilson and the Seahawks went 4–1 in their next five games en route to an 11–5 overall record. Their 2012 campaign included big wins over the Green Bay Packers, New England Patriots, and San Francisco 49ers. The Seahawks went into the playoffs as the No. 5 seed and the only team that season to go undefeated at home. In the Wild Card Round, the Seahawks overcame a 14-point deficit to defeat the Washington Redskins. This was the first time since the 1983 Divisional Round that the Seahawks won a playoff game on the road. However, in the 2012 Divisional Round, overcoming a 20-point, fourth-quarter deficit would not be enough to defeat the #1 seed Atlanta Falcons. An ill-advised timeout and a defensive breakdown late in the game cost the Seahawks their season, as they lost, 30–28. QB Russell Wilson won the 2012 Pepsi MAX Rookie of the Year award. 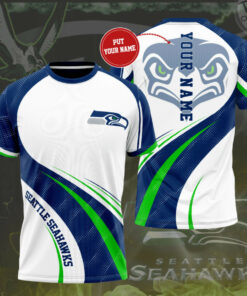 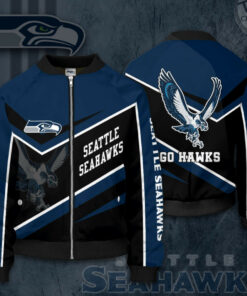 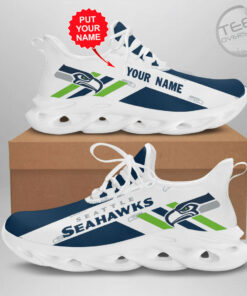 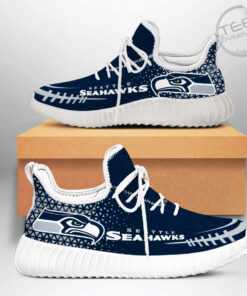 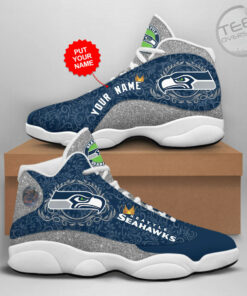 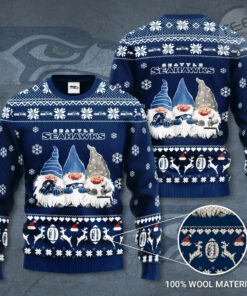 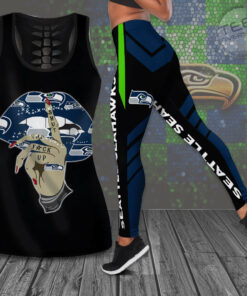 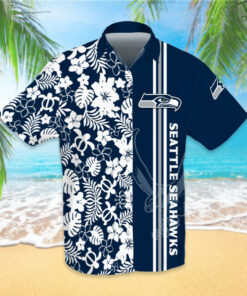 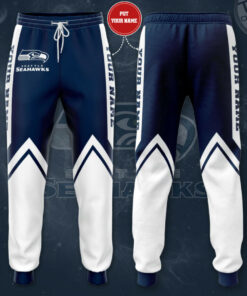 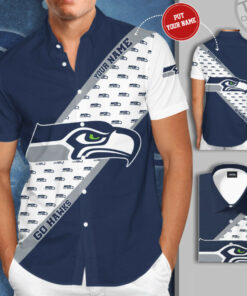 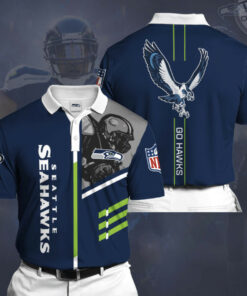 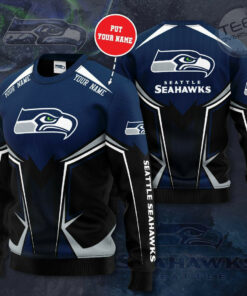 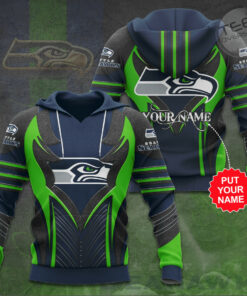